Wanted: by Dead and Alive

Wanted: by Dead and Alive

Don’t try to make an appointment with Suzane Northrop.  She’s booked for years to come. In the livingroom of her New York City apartment, she has boxes of mail from people who want her help.

Why are so many people seeking this woman? She has connections and  most of them are dead.

Northrop, a medium who helps bridge the gap between the living and the spirit world, lectures ro groups ranging from the American and British Societies for Psychical Research to the New York Women’s Bar Association.

She’s been on radio and television (including Regis and Kathie Lee) and served as Demi Moore’s consultant in The Butcher’s Wife, a film in which Moore plays a clairvoyante named Marina.  Recently, Dell released Northrop’s book The Séance: Healing Messages from Beyond on paperback.

While vacationing in South Florida in February, Northrop appeared as a guest on Inner Views, Liz Sterling’s one-hour show on WWNN (980-AM) in Boca Raton.  She took several calls and rold people about their dead relatives.  Not only was Northrop on target with the callers, Sterling says, but afterwards, Sterling got a few messages of her own.  Northrop, she says, told her stuff that no one (aside from herself) could possibly know.

Nearly everyone has a relative or friend who died before they got the chance to tell them something.  And those are the people who seek Northrop.

From musician to medium

As a child, Northrop was keenly aware she was different.  When she was a teenager, her grandmother visited and encourage her to continue her music lessons.  This wouldn’t be so unusal, except for the fact that her grandmother was dead.

It was Northrop’s first visit from the spirit world, and an introduction to what would eventually become her life’s devotion.  But it took her years to realize that.

Hell-bent on a career in music, she moved to New York, where she started doing informal psychic session for friends.  She didn’t have much money, and her friends told her that she might as well get paid for her services.

Reluctantly, she started doing sessions at street fairs for $3 apiece.  It’s been 29 years now since she set aside music to devote her life to connecting living people with their dead love ones, and vice versa.  Ironically those same qualities that drew her to music¾a passion for sounds and a desire to take people to another level¾have made her such a sought-after medium.

And it’s not just the living who seek her out.  Those dead people, who sometimes show up unannounced with a message for this person or that, can be equally aggressive.

When they show up, she describes them to their living loved ones with specifics.  She may say something like, “It’s a man with a P name, Patricj or Peter.  He’s on you wife’s side of the family.  He has a limp He passed quickly.  Very young.  Something in his chest.  Lung cancer, perhaps.  He comes with a small dog.  He says he is glad you are still wearing his watch.”

Sometimes, Northrop says, it may take a while for someone’s living relative or friend to put together the pieces.  But if there’s one thing she has learned about DPs (short for what Northrop calls members of the Dead People’s Society), she says, it’s that they’re rarely wrong.  “Don’t ever argue with the dead people,” Northrop says.  “They’re usually right.  It’s the living who are a little slow.”

Spirits in the material world

And it’s for the living that she writes this book.  Readers become eyewitnesses at a séance.  Ditch preconceived notions.  There are no Ouija boards, flickjering candles, or conjuring of evil spirits here.  Rather, it works like this: a group of six to 12 people hang out in a room together, their dead friends, relatives, and pets show up. And Northrop serves as a translator of sorts.

With all those spirits crowding in one room, things can get a little chaotic.  Messages come loud and fast.  The DPs have much to say, and some don’t like to wait their turn.

Seances can be downright overwhelming.  “The strongest most determined souls are the ones who bulldoze their way to be first ‘on line,’” Northrop says.  This should come as no surprise to their friends and relatives.  After all, before they were pushy dead people, they were pushy living people.

Luckily, Northrop has friends in high places.  Elizabeth, her connection in the spirit world, pitches in to help organize the troops and assure that everyone gets a turn.

Readers may be wondering why, if dead people have such incredible abilities, they don’t just report directly to their lived ones for the occasional chat.  If a dead relative came and stood at the end of your bed, says Northrop, you’d probably have a heart attack and join them.

It doesn’t mean that people can’t make their own connections, though.  She’s love to see more people doing just that.  She suggests people start by making an appointment.  Not with her, though.  With dead relatives and friends they’d like to hear from.  A whole chapter is devoted to helping people make themselves more available to those folks who now live in the spirit world.

The book’s cover states: “Discover how to move from the shadows of this world … to the light of the other side.”

To some, the concept will sound far-fetched, perhaps even crazy.  The book’s not likely to convince a die-hard skeptic (only a physical visit from a dead relative could do that, and even then they’d probably think they hallucinated).  But for the open-minded, it’s well worth forking over the six bucks.

Northrop has a simple, straightforward way of putting things.  And part of what makes her book convincing is that it’s not designed to drum up clients.  She already got more than she could handle. 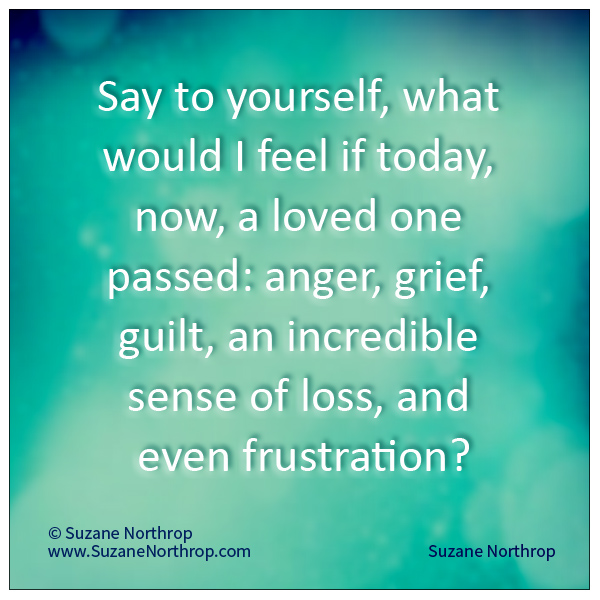