It’s not easy being able to talk to the dead.

As one of the world’s leading trance mediums and experts in psychic phenomena, Suzane Northrop should know.

“I’ve done this work for a very long time,” said the openly lesbian conduit to the spirit world. “I was doing medium before anybody else was doing medium.” Northrop said she was born with the gift of being able to communicate with spirits and realized she was different from everybody else as a child.

“It was a natural thing. I wasn’t raised in a strong religious family so I didn’t have that dogma. I was raised in a rural farm community, so I think my experience was a little different than other people who might learn this work. By the time I realized what that meant, I was too far gone. I was in my early 20s. You can’t shut it off at that point. But my background was music. That was what I aspired to do with my life. Of course, I ended up not living my life exactly how I wanted, but I think in that process artistically I was receiving music and contact from the spirit world.”

It appears the spirits have been good to Northrop. In her 26- year career, she has parlayed her ability to bridge the gap between the world of the living and the departed into a successful literary career with books like “The Séance: Guide for the Living,” “Second Chance: Healing Messages from the Afterlife” and “Everything Happens for a Reason” to her credit. She also has lectured extensively in North America and Great Britain and acted as a consultant to police departments in New York City, Connecticut, Washington, D.C., and Los Angeles.

Her heightened profile in her field has made her a favorite guest on TV shows such as “Extra,” “Entertainment Tonight” and “The Regis and Kathy Lee Show.” Now, like some of her more high profile colleagues, Northrop has her own show. Here! TV’s “The Afterlife” debuted on March 6, with Northrop and co-host David Millbern holding a series of unedited séances for a gay and lesbian audience.

“It will be the only show done live with a medium that’s not edited,” Northrop said. “It’s a pretty big deal. There are only two other shows that are currently on air. The other is John Edward on WE. I actually mentored him, so he’s the real deal. Then there’s Lisa Williams that does Lifetime.”

Northrop said she’s aware of her skeptics but that it’s just the nature of what she does that creates doubt.

“I think a lot of it is fear and misunderstanding,” she said. “I think they think this is like a computer printout. They figure that if you’re connecting with someone who has passed over, you’re having a linear conversation and you’re not. The information comes more right brain than left brain.”

She said religious and spiritual beliefs also play a factor in how people view what she does.

“I’ve literally had priests on my couch that have been unbelievably supportive of my work,” she said. “Then you will have people that say that it’s the devil’s work. Only people who are into what I call serious dogma, born-agains and things of that sort, come out really intense against what I do.”

It was those kinds of reactions that made it difficult for her to continue working with police departments as an investigative consultant.

“I haven’t done it in several years,” she said. “It’s extremely intense. I did much of that work in California and Connecticut. Unless you are a medium that has some kind of direct correlation with somebody of the law, they don’t know how you work and you’ll end up being the one interrogated even though they’re going after somebody else.

“I did a case many years ago, and one of the police officers was born again [Christian]. Ultimately, what happened is that he took the information and the weapon that was used and threw it in the ocean and said that it was the devil because I had given the information on where to and the pipe that someone had been beaten by. If you’re going to work with somebody, you’ve got to work with someone who believes in what you do and understand the process of tracking down the information.”

Still, Northrop said she has been surprised at how open people are to her talents in some of the most unlikely locations, as she learned in her recent nationwide book signing tour.

“One part of it was the South,” she said. “I thought there would be a lot of eye-raising, and on some level there was and on another level there wasn’t. I was unbelievably graciously accepted in Memphis, and that’s really in the center of the Bible Belt.”

“The Afterlife with Suzane Northrop” can be seen on the Here! network. For more information and show times, visit www.heretv.com/the_afterlife or www.theseance.com.  Larry Nichols does not see dead people and can be reached at larry@epgn.com. 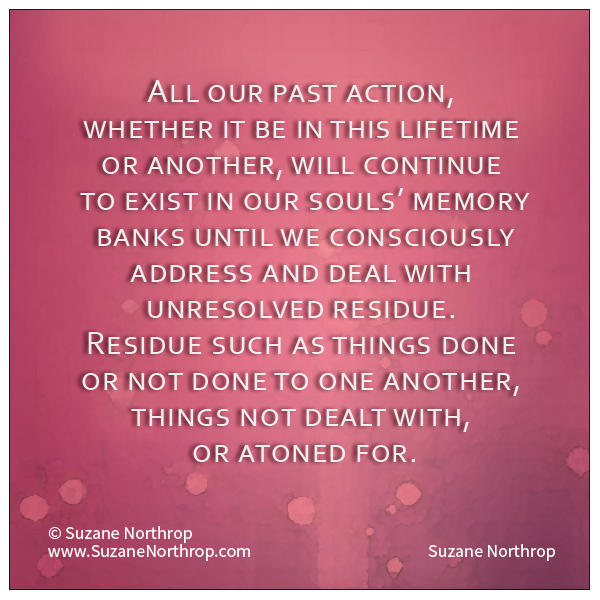